A kernel is the lowest level of software that interfaces with the hardware in your computer. The Linux kernel is a fundamental part of Linux and contains millions lines of code. It is released under the GPL (GNU General Public License), which allows public access to the source code. It was developed in 1991 by a Finnish computer science student Linus Torvalds. Today, thousands of developers from all over the world contribute to the development of the Linux kernel.

Generally, most kernels fall into one of the three types: monolithic, microkernel, and hybrid. Linux is a monolithic kernel which means that the entire operating system is working in kernel space and is alone in supervisor mode.

Here is a diagram of a monolithic kernel (Photo credit: Wikipedia) 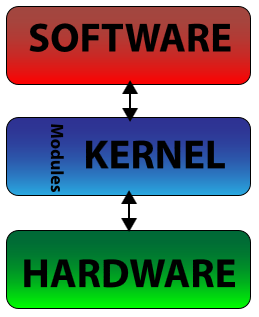 To find out the kernel version of your Linux installation, you can use the uname -a command:

No comments to show.

Egypt to adopt Russian ruble in tourism as of end of September: Russian media